Country works on reducing income disparity with its Asian neighbor

China’s experience in poverty alleviation has provided valuable lessons to Thailand, and the two countries are expected to enhance their cooperation on this issue after the pandemic, experts said.

“Thailand has followed the Chinese model in poverty eradication through a systematic national strategy that encompasses policies and measures that would uplift the poor,” said Kavi Chongkittavorn, a senior fellow at the Institute of Security and International Studies of Bangkok’s Chulalongkorn University.

Chongkittavorn said China and Thailand “have been learning from each other ever since the establishment of diplomatic ties 45 years ago”, noting that China has been successful in eradicating extreme poverty over the past three decades. China declared “complete victory” in the fight against absolute poverty in February, meeting the poverty eradication target set by the United Nations’ 2030 Agenda for Sustainable Development 10 years ahead of schedule.

In Thailand, some approaches taken by the government are targeted poverty alleviation programs for vulnerable groups, including women, children, the disabled and minorities. “It is an integrated and long-term policy,” he said.

According to a Bangkok Post report, the Thai government will launch a number of projects this fiscal year to narrow income disparity based on the big data analytics tool Thai People Map and Analytics Platform.

“This is the first time the government has used TPMAP as a tool to tackle income disparity more efficiently and precisely,” said Danucha Pichayanan, secretary-general of the National Economic and Social Development Council. “This method is applied by the Chinese government to formulate and implement policy to solve poverty.”

Thai Deputy Prime Minister Wissanu Krea-ngam said in an interview with Xinhua News Agency that Thailand is inspired by China’s poverty alleviation practices assisted by science and technology. Thailand plans to boost development of agricultural and rural areas, as well as work together with colleges to map out poverty alleviation plans and dispatch college students to support poor regions.

Rajendra Shrestha, a professor at the Asian Institute of Technology in Thailand, said that as nearly half of Thailand’s poor work in the agricultural sector, China’s experience in targeted poverty alleviation strategy and assistance, enhancing digital literacy and relocation are successful examples for Thailand to follow.

In the northeastern province of Khon Kaen, the local government implemented a “pair-up” model in October 2019 after learning from China’s targeted poverty alleviation projects. Under the model, one public servant and a company employee will be paired up with two poor households to provide customized solutions.

As of January, the Chinese Consulate General in Khon Kaen said the pair-up program has lifted nearly 80 percent of 1,174 households out of poverty and there is a chance that it will be promoted across Thailand. With support from the Chinese consulate, Khon Kaen also launched a demonstration household project this year.

“Poverty alleviation is a priority in Thailand,” Shrestha said. He added that Thailand has a long history of poverty alleviation work dating back to the 1950s, with policy focus shifting from developing poor rural areas and increasing community involvement in the 1990s to education in the 2000s and recent issues like reducing income disparity. 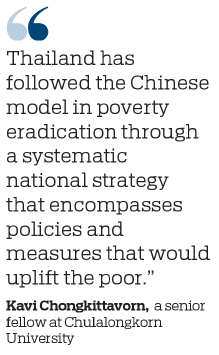 Thailand has made remarkable progress in social and economic development over the past 40 years by transitioning from a low-income to an upper-income country in less than a generation. Based on figures from the World Bank, the poverty rate declined substantially from 65.2 percent in 1988 to less than 10 percent in recent years.

But Shrestha said the changing context brought by COVID-19, environmental disasters induced by climate change, and economic slowdown has caused a poverty surge in many countries, including Thailand, despite government efforts to reduce the effects.

Shrestha said there is a lot Thailand can learn from Chinese NGOs and companies as they play an active role in poverty alleviation. This includes cooperation with the government, skills training, locally suitable nature-based technology and knowledge transfer, and creating local business and alternative employment opportunities via means such as microfinancing.

Shrestha also said Thailand and China have been collaborating in poverty alleviation efforts through education. Last year, the Alliance of Poverty Reduction and Development was formed by the Institute of Geographic Sciences and Natural Resources Research of the Chinese Academy of Sciences and 14 other university members including AIT.

Chongkittavorn said Thailand still has a small group of extremely poor people without social access and mobility. “This is the biggest challenge that the government is tackling with some lessons learned from China,” he said.