University of Georgia President Jere W. Morehead has been selected as the recipient of the 2021 Chief Executive Leadership Award by the Council for the Advancement and Support of Education District III.

CASE is a global association dedicated to educational advancement, serving professionals in development, alumni relations, and marketing and communications. District III of the association comprises institutions in nine Southeastern states, including Georgia. 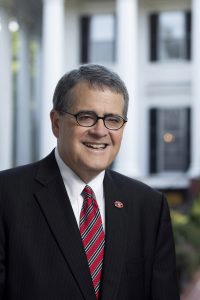 “I am honored to receive the Chief Executive Leadership Award from CASE District III,” said Morehead. “This award reflects our community’s unwavering commitment to the University of Georgia’s mission, and I am proud to accept this recognition on behalf of our exceptional faculty, staff, students, alumni and friends.”

Applications for admission, meanwhile, have risen over 80%, and the academic credentials of entering students have reached record levels. U.S. News & World Report has rated UGA a top 20 public university for five consecutive years, including a rank of No. 15 in 2020.

“As one of the top research institutions in the nation and our state’s land-grant university, UGA sets the pace and profoundly impacts Georgia through its mission of teaching, research and service,” said University System of Georgia Chancellor Steve Wrigley. “With this as the standard, UGA, by every measure, has become significantly stronger under President Morehead.”

UGA’s research enterprise has grown significantly under Morehead’s leadership. R&D expenditures have risen 41% since 2014, while the university has ranked in the top five nationally for six consecutive years in sending research-based products to market – including a No. 1 ranking in 2021. The university now contributes an estimated $6.5 billion to Georgia’s economy.

As president, Morehead has also continually emphasized UGA’s core ideals of diversity and inclusion. In 2017 he launched the New Approaches to Diversity and Inclusion Program to identify and scale up strategies promoting the recruitment, retention and success of underrepresented students. In July 2020, he convened a Task Force on Race, Ethnicity, and Community, along with a Planning Committee on Diversity and Inclusive Excellence, to improve UGA’s learning environment and foster a more diverse and inclusive campus culture. In recognition of these and other efforts, UGA has been awarded the INSIGHT into Diversity Higher Education Excellence in Diversity Award for seven consecutive years.

Nominees for the Chief Executive Leadership Award were also evaluated on how they have increased the stature of their institution and supported institutional advancement. In 2016, Morehead launched an ambitious experiential learning initiative, making UGA the largest public university to ensure students gain hands-on experience before graduation.

Meanwhile, alumni and friends have invested in UGA at record levels during Morehead’s tenure.  In 2016, the university launched the Commit to Georgia campaign, the most ambitious fundraising effort in UGA history. The campaign secured $1.45 billion, with over 175,000 donors creating 3,600 new scholarships – more than doubling the amount of financial aid awarded to students – and nearly 100 endowed faculty positions, an increase of 42 percent.

Neal Quirk, executive vice-chairman of the UGA Foundation Board of Trustees, wrote in support of Morehead’s nomination: “President Morehead has been like no person I have ever known in his dedication to our development efforts. The University of Georgia will forever be grateful to this extraordinary servant leader.”

Morehead has served at the University of Georgia since 1986 in both faculty and administrative roles. Prior to becoming president, he served as senior vice president and provost from 2010 to 2013. Earlier, he held a range of administrative posts, including vice president for instruction, vice provost for academic affairs, and associate provost and director of the Honors Program.  Morehead began his career at UGA as an assistant professor in the Terry College of Business and advisor to the School of Law’s moot court program.

In addition to his duties at the university, Morehead also serves as vice chair of the NCAA Division I Board of Directors and as a member of the NCAA Board of Governors. Additionally, Morehead is the vice president of the Southeastern Conference.

“I can think of no one more deserving of the CASE District III Leadership Award than President Morehead,” said Joan T.A. Gabel, a former law student of Morehead’s who now serves as the president of the University of Minnesota. “Jere is widely respected, and his counsel is regularly solicited by university presidents and leaders of intercollegiate athletics across the country.”

Established in 1999, the CASE Chief Executive Leadership Award is presented annually to an institutional head, president, chancellor, system head or other campus chief executive who has demonstrated outstanding leadership and service in support of education.